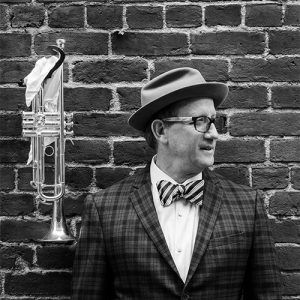 Kevin started his career as staff musician for Ringling Bros. & Barnum and Bailey Circus Band, then Walt Disney World for 10 years. In 1992 He moved to New Orleans and performed/toured with Grammy nominated DUKES of Dixieland, Pete Fountain, Clarence "Gatemouth" Brown, and New Orleans Nightcrawlers Brass Band. In 2001-2007, Kevin was Music Director/performer for Toronto's downtown Historic Distillery District.  in 2010, After a brief period in Charlotte, NC as Music Director/performer for the Americana Restaurant Group, he relocated back to New Orleans and led New Orleans own DUKES.  He recently moved on to Music Director/musician for Fritzel's Jazz Pub (733 Bourbon Street) and performs with GRAMMY winning New Orleans Nightcrawlers brass band.

Check out illustrated Kevin on Simpsons episode 635. "Lisa gets the blues"

Sign up to hear about upcoming shows, albums, and events.